Personal Thoughts on Peter Kreeft’s BACK TO VIRTUE.

I have previously published my review of Peter Kreeft’s excellent book, Back to Virtue. In this post I wanted to provide a more personal view of how the book changed or perhaps broadened my thinking. At one point, Kreeft talked about how Christianity brought together the best of what Hebrew, Greek, and pagan thought and tradition had to offer. This is depicted in the diagram below (reworked to capture my own musings on this important idea from a similar diagram in the book). 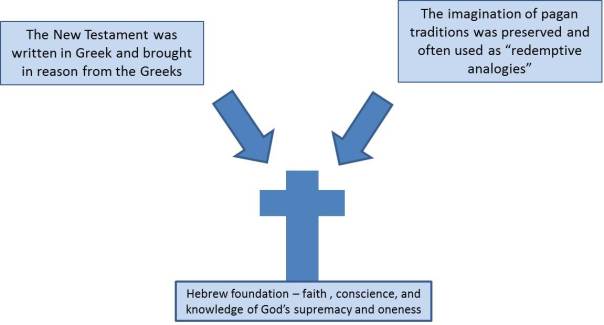 If one reads the New Testament, one can’t help but notice how Christianity is grounded on, and grew forth from Hebrew history, revelation, and practice. All of the very early Christians were Jewish. The Old Testament is cited again and again in the New. Even the Christians called out of Greek and pagan backgrounds were steeped in the Greek translation of the Old Testament. When Paul spoke in 2 Timothy 3:16 about “all scripture,” he was primarily referring to the Old Testament.
Jesus had to be born into Jewish society because they had a high view of God: his Oneness and His creation of the world out of nothing. Had Jesus been born in Athens, as pantheists and polytheists, they would have happily put Jesus alongside Zeus and so missed the whole point of the incarnation. The shocking incredulity of the Jewish mindset to the incarnation was absolutely necessary for us to get the message and import of what was taking place.
This Hebrew ground or environment for the incarnation did not come without cost or loss. As far as I can tell from my reading, the first century Jewish people were remarkably free of idolatry. A by-product of this achievement was a complete lack of development of some of the arts such as sculpting and painting because they were too closely associated with idol worship. Kreeft helped me realize how this temporary omissions were build back in to the Christian community after the significance of the incarnation and resurrection of Christ were recognized.

The use of Koine Greek (the lingua franca of the Mediterranean and Middle East) as the language of the New Testament had profound consequences. Not only did it bring the Good News in the common language of the Roman Empire, but it could make use of the nuances of language and thought brought into Greek by Socrates, Plato and Aristotle. So for example it enabled the distinction between the old nature (flesh – sarx) from body (soma), drawing a clear distinction between Gnosticism and Christian teaching by putting a high value on the body as well as the spirit (Gnosticism values only the spirit). It also made God-guided reason an important way of testing truth claims and made reason an integral part of understanding teaching.

When viewed as a religious system, pagan polytheism was simply a branch of pantheism. But pagan practice had given rise to stories, plays, and poetry that showed a wonderful imagination and a longing for truth. Here again, it seems to me Christianity was able to keep the good. Much if not all of the ancient literature was preserved by the Church as the Roman Empire collapsed and the anarchy of the Dark Ages replaced it. The use of imagination as an engine of the written arts and also of science has played a significant role and life of the church.

So What Does This Mean to Me?

Kreeft’s analysis and synthesis has allowed me to see a number of things in a new way. Here are some of them:
1. God is always working toward the summum bonum, the greatest good.
2. Sometimes because of our weakness and frailty, we miss out on some things as the Israelites did as they were learning to avoid idolatry and so gave up some of the arts. These temporary omissions are part of our growing process.
3. In the end all genuine good comes from God and we as his people are not wrong to seek it. You cannot go far wrong if one truly seeks the good.
4. My own Christian walk is founded on my personal interaction with the Lord Christ through His received word and His Spirit. Imagination and reason play an important role in that interaction.

In The Philosophy of Thomas Aquinas, Kreeft points out the differences in the way the word “reason” was used by Aquinas and how it’s used by modern philosophers. Aquinas and other ancients used reason to denote knowing, judging, as well logical processes such as inductive and deductive analysis. Modern philosophers, according to Kreeft, tend to use it only in the third sense.