A Response to Stuart Aken’s Blog on “Why are we required to respect religion?” 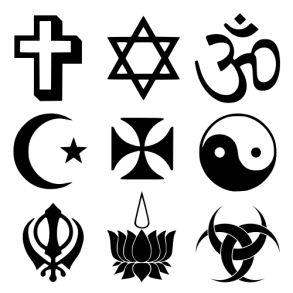 Writer Stuart Aken, in his blog entitled I’d Like to Know: Why? #3 Religion, asks the provocative question: “Why are We Required to Respect Religion?” This question is of interest to me as a Christ-follower (even though I would not characterize myself as religious—I know other people would characterize me in that way).
As I thought about Mr. Aken’s blog, it led me to think about how the phrasing of the question channels the responses that this question elicits. It’s always handy to set up a contest or a discussion so that only one side is given the bows and arrows while the other is left only with a shield. It’s like a Canadian or American football game where the rules of the contest allow only one team to play offence (and hence is best set up to score points) while the other is perpetually on defense. I think such a rule-based asymmetry is neither sporting nor does it readily necessarily let the better team prevail.

If one looks at the question in its current form, then Christians, Jews, Muslims, Hindus, and other adherents of a religion are on trial to justify their beliefs and explain why their beliefs merit respect, but atheists, agnostics, materialists, and secularists are excluded from scrutiny by the form of the question itself.
It seems to me a more instructive and fairer form of the question would be: “Why should I respect the World View of others when their World View differs from my own?” In this context I use “World View” to mean how I and others view reality. I think this re-configuring of the question has important advantages:

1. Now everyone, religious and agnostic alike has a chip in the game and has beliefs that may be called into question.
2. It ought to be understood that everyone intrinsically believes that their World View best explains the real world (material and spiritual).
3. Any criticism that is leveled at another World View can also properly be asked of one’s own. So if one asks if religious world views are prone to violence, one has to ask if one’s own World View is different in this regard and why.
4. In this kind of a discussion, if one begins to believe that many of the key things one genuinely believes about the nature of reality are wrong, this will be a very unsettling development for everyone who experiences it—not just religious people.
5. Finally, I think it prevents participants in the discussion from making the disastrous mistake of assuming that all religions are really the same, merely because they are religions. Even within a religion there may be substantial differences in World View by adherents because of differences in emphasis, in interpretation of sacred texts, in theology, or by reconciliation with other sources of evidence.

Thank you Mr. Aken for raising this important topic. Perhaps as time becomes available, I will be able to give my perspective on some of the other follow-on questions you raised in your post.