My Review of THE END, THE WAYFARER’S GUIDE TO THE APOLCALYPSE

The End, The Wayfarer’s Guide To The Apocalypse by Joanne Rolston
My rating: 4 of 5 stars

Joanne Rolston, in her book THE END: A WAYFARER’S GUIDE TO THE APOCALYPSE, wrote in the Epilogue, “I hope I’ve given you a different view of the enigmatic end-times book of Revelation.” She has certainly done that!

In the personal, storytelling style reminiscent of PILGRIM’S PROGRESS, Wayfarer is a traveler looking for the house of wisdom after hearing Wisdom speak in a town square. When she finally comes to Wisdom’s house she meets the sisters, Wisdom and Prudence, their father Abba, and Miles who is in charge of the house library.

What follows is a detailed journey through the book of Revelation mostly guided by Abba, but also with input from Miles and his resources in the library. Rolston has worked meticulously to make contact with modern-day events as she expounds on the various passages in Revelation. These modern-day touch points of Rolston’s narrative make this book of special interest to me since I like to check things out. For example, I did not know that the Greek word for the pale rider is transliterated chloros (green), the root word for chlorine, a green-colored elemental gas. I also looked up the UNESCO World Heritage site for the birthplace of Gautama Buddha (the site number is 666 which a significant numeral in Revelation). Finally, I looked up the Halloween asteroid of 2015 on the Near Earth Object database. These are only a few of the significant observations that are open for further investigation and verification by the reader.

In summary, if you have an interest in the book of Revelation and would like a new, easy-to-read perspective that touches on many recent events, this book would be of great value to you. I highly recommend it.

The Coddling of the American Mind: How Good Intentions and Bad Ideas Are Setting Up a Generation for Failure by Jonathan Haidt
My rating: 3 of 5 stars

To my thinking, THE CODDLING OF THE AMERICAN MIND is really two books which I would rate very differently and as such the average overall rating (three stars) is misleading. The first three chapters are excellent and I would rate that portion of the book as four or five stars. They delineate the root causes behind many of the disturbing trends one sees in the thinking and conduct of undergraduates today and analyzes these causes in terms of Cognitive Behavioral Therapy (CBT). They distill their observations and recommendations into three lies and about nine pit falls in thinking CBT attempts to counteract. I found these ideas very helpful and continue to use them to analyze my own thinking. I will read these chapters over and over again.

I am much less sanguine about the second part of the book which provides anecdotes, supposedly in support of the early chapters. Reiterating the events at Evergreen State College was useful, but for most of the anecdotes and discussion, I found that the authors broke their own rules. They used labeling extensively without clearly defining their labels. Many of the labels were highly pejorative, yet as far as I could see the authors did not explain why the labels were appropriate. They seemed to engage in mind reading (another of the pitfalls) in that they seemed confident they knew what motivated the various non-university groups which they also seemed to blame for the anxiety-ridden undergraduate mindset.

When I finished and thought about what I had read, it seemed to me they were aiming for an “equality of blame” in their analysis of the anecdotes. This made no sense to me. The university administrations establish codes of conduct, enforce them, hire faculty, permit or exclude external speakers, and ultimately decide if they will support or not support teachers and students that are under attack for their views. Similarly the reading lists, course work, examinations, and grading are carried out by the faculty. Furthermore professors, by their own conduct and the way they approach questions provide examples to the students on how one should behave as one purses truth in an unbiased and objective manner.

It seems ludicrous to me to argue that outside forces or groups that have trouble even getting an invited speaker onto campus can share equal culpability for how students are turning out.

In summary, the early chapter are excellent and deserve a rating of four or five stars. The rest of the book, to my mind deserves only one or two stars. The average or overall rating, is perhaps, 2.5 to 3 stars.

I have the privilege of reading a short passage on Writer’s Groups as part of the festivities. It looks to be great fun and I am honored to be asked to participate.

Insights from Jordan Peterson on the Old and New Testament 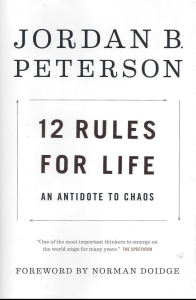 My book club is reading Jordan Peterson’s 12 Rules for Life; An Antidote to Chaos. As part of this reading program I have been listening to various interviews of Peterson and a recent one, taken from a talk and interview at Lafayette College , caught my particular interest.

After a lengthy and colorful introduction by the moderator, Peterson posed a question to the audience. I am going to tell you what I heard in my own words, but I highly recommend you listen to his comments for yourself.

In my paraphrase and summary, his preamble and question went like this:

So called “right wing thinking” is concerned about establishing hierarchies (which are necessary for survival and for society to function), while “left wing thinking” focuses on equality and fights for the bottom tier of the hierarchies that have been established (which is also necessary).

He went on to say that we know where “right wing thinking” crosses the line into extremism: when they claim one group (usually their own) is intrinsically superior to other groups. Peterson then asked the question: Where is the line for extremism on the left?

He went on to answer his own question. The line is crossed on the left when their zeal for equality for the lowest tier in a hierarchy causes them:

What Has This to Do With the Old and the New Testament?

Note: I’m not especially interested into entering into political discourse, important as that may be, but I am interested in how Peterson’s comments affect my thinking about the history of Judaism and Christianity described in the Old and New Testaments. I will confine my remarks to that subject.

I thought about the points Peterson made, and it struck me how this analysis parallels what I see in the Old and New Testaments. In the Old Testament, when primarily describing God’s dealing with His chosen people Israel, he clearly sets up hierarchies: indeed he set up a political one and a religious one each of which acted as a balances to the another. This structure enabled the Israelites to survive despite encountering many enemies and suffering under the afflictions they caused whether it be slavery in Egypt or captivity by Babylon. Even under the heel of the Roman Empire, their identity and cohesion as a people was preserved. When I look at it, the hierarchies in their culture and in their relationship to outsiders contributed positively to their survival and cultural cohesion. However, there was potentially the possibility of crossing the hierarchical line that Peterson articulated.

When Jesus came, he seemed to turn everything on its head. He came in at the lowest tier—as many thought—the illegitimate son of a Galilean carpenter. Yet Christ, while not destroying the Jewish hierarchy, taught that to be a leader in His Kingdom, the leader has to be servant of all. This seems very much like fighting for the lowest tier.

Given Peterson’s analysis, it’s striking to me how Christ came to restore a sense of balance to the hierarchies and keep the Jewish people (and hopefully Christians as well) from crossing the line into extremism where “chosen people” comes to mean “as a people we are superior.” This has been helpful to me because it shows a natural progression in the Old and New Testaments and shows how hierarchies and fighting for the lowest tier are both essential for balance.

Disclaimer: I know Professor Peterson has delivered some lectures on biblical topics. I have not listened to any of them.

My Review of D. S. Martin`s CONSPIRACY OF LIGHT

Conspiracy of Light: Poems Inspired by the Legacy of C.S. Lewis by D.S. Martin
My rating: 5 of 5 stars

I share D. S. Martin`s love for the writings of C. S. Lewis. For that reason, reading Conspiracy of Light was for me a double pleasure.

On the one hand, I can enjoy D. S. Martin`s poems on their own merit. For example I can picture a lion standing between two mountain ashes in What Lucy Saw and be carried on to plumb the depths of what it means to follow Christ even when the path is unclear and uncertain.

On the other hand, when I re-read one of Lewis`s books, I can also read a poem associated with it from this collection. D. S. Martin has a helpful Notes & Acknowledgements section in the back which makes it easy to read the poems associated with a particular Lewis book or essay. Reading “Conspiracy of Light“ in conjunction with Lewis adds a dimension to my enjoyment. The beauty and logic of Lewis`s writings is amplified by the pictures and emotions that D. S. Martin`s poems evoke.

I highly recommend this book to anyone who loves reading Lewis.

Here is my review recently published on Goodreads:

The Game Changers is a powerful and moving book that gives a snapshot of the lives of key leaders, healthcare workers, and teachers in Uganda as they struggle to solve the huge problem mother-and-child deaths during pregnancy and delivery. Through the lives of front line workers, Dr. Jean Chamberlain-Froese (the founder of Save The Mothers) and Patricia Paddey (a journalist) provide heart-wrenching accounts of the magnitude of the problem as well as a look at the courageous men and women that are working to solve it in East Africa.

This book will move you and also give you a sense of hope as you see the commitment of these Ugandans, see how their deep faith moves them to action, and marvel at the progress that has already been made. It will also leave you (as it did me) with a profound sense of gratitude that we are not forced to go through the same trials here. The Gamer Changers is worth reading several times and can also be picked up and read in short sittings. I highly recommend it.
View all my reviews

Tags: Save the Mothers, Uganda